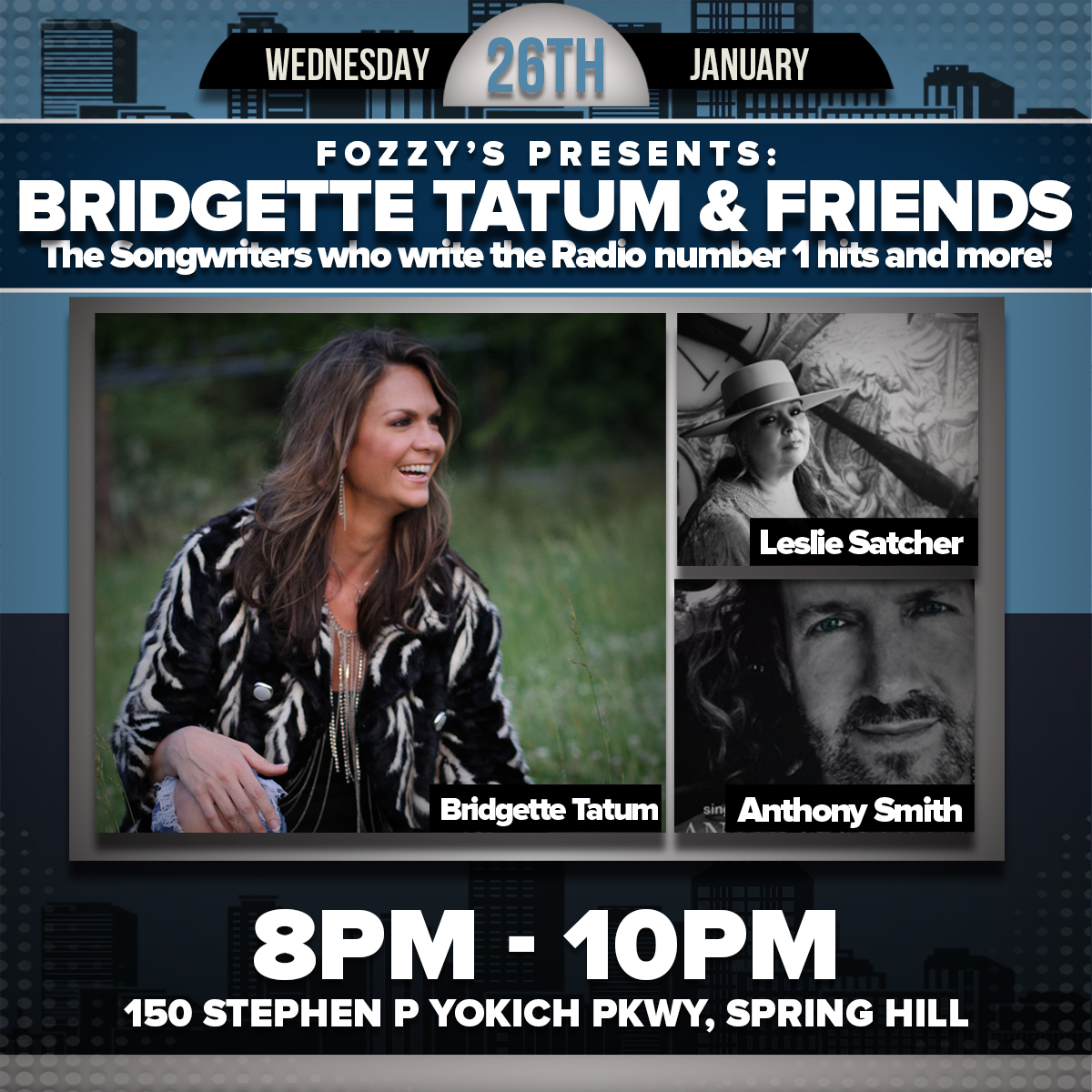 To buy tickets ahead of time, click here – https://www.eventbrite.com/e/bridgette-tatum-friends-songwriters-who-write-radio-number-1-hits-tickets-244607647057?aff=webnface

Few female Nashville singer-songwriters are more respected or more revered than the stunning talent that is Leslie Satcher. At the age of 26, the native Texan made the move to Nashville in pursuit of a singing career and was quickly recognized for her gift with lyric and melody. After being mentored at a smaller publisher by many of the music industry’s legendary songwriters, she made the move to Sony Music Publishing where she would stay for nearly 15 years. During this time, she was also signed as an artist at Warner Brothers. While recording her critically acclaimed debut album, “Love Letters”, her songs were growing in demand.

Though Leslie is primarily known as a country singer and songwriter, her talents cross all genres. She has written or co-written songs that have been recorded by everyone from Willie Nelson to Ariana Grande; Vince Gill to Sheila E.; George Strait to Sheryl Crow; Martina McBride to Keb’Mo; Blake Shelton to Bonnie Raitt and many, many more. She has received multiple BMI “Million-Air” awards recognizing a song’s one millionth airplay and her incomparable vocals contribute to an astounding number of Grammy, CMA & ACM award winning projects.

Leslie’s next two albums, “Creation” and “Gypsy Boots” were recorded independently and truly exhibit the diversity of her Texas roots and Delta soul. They are available on iTunes, CDBaby and every other major digital distributor.

She was signed to a 2015 publishing deal with London powerhouse Notting Hill Music and a recording contract with NHM’s Los Angeles based innovator of digital distribution; Notting Hill Music Masters (NHMM) label. Her debut NHMM release, “2 Days In Muscle Shoals” features her All-Star band “The Electric Honey Badgers” and includes vocals by Vince Gill, Sheryl Crow, Trisha Yearwood and more. This amazing project landed her on the First-Round GRAMMY ballot in multiple categories for the 2018 & 2019 awards seasons. In the past year, Leslie has seen her songs recorded by the likes of Reba McEntire, Sheryl Crow, Maren Morris, Stevie Nicks, Joe Walsh, Vince Gill and many, many more.

To get your tickets visit – https://www.eventbrite.com/e/bridgette-tatum-friends-songwriters-who-write-radio-number-1-hits-tickets-244607647057?aff=webnface