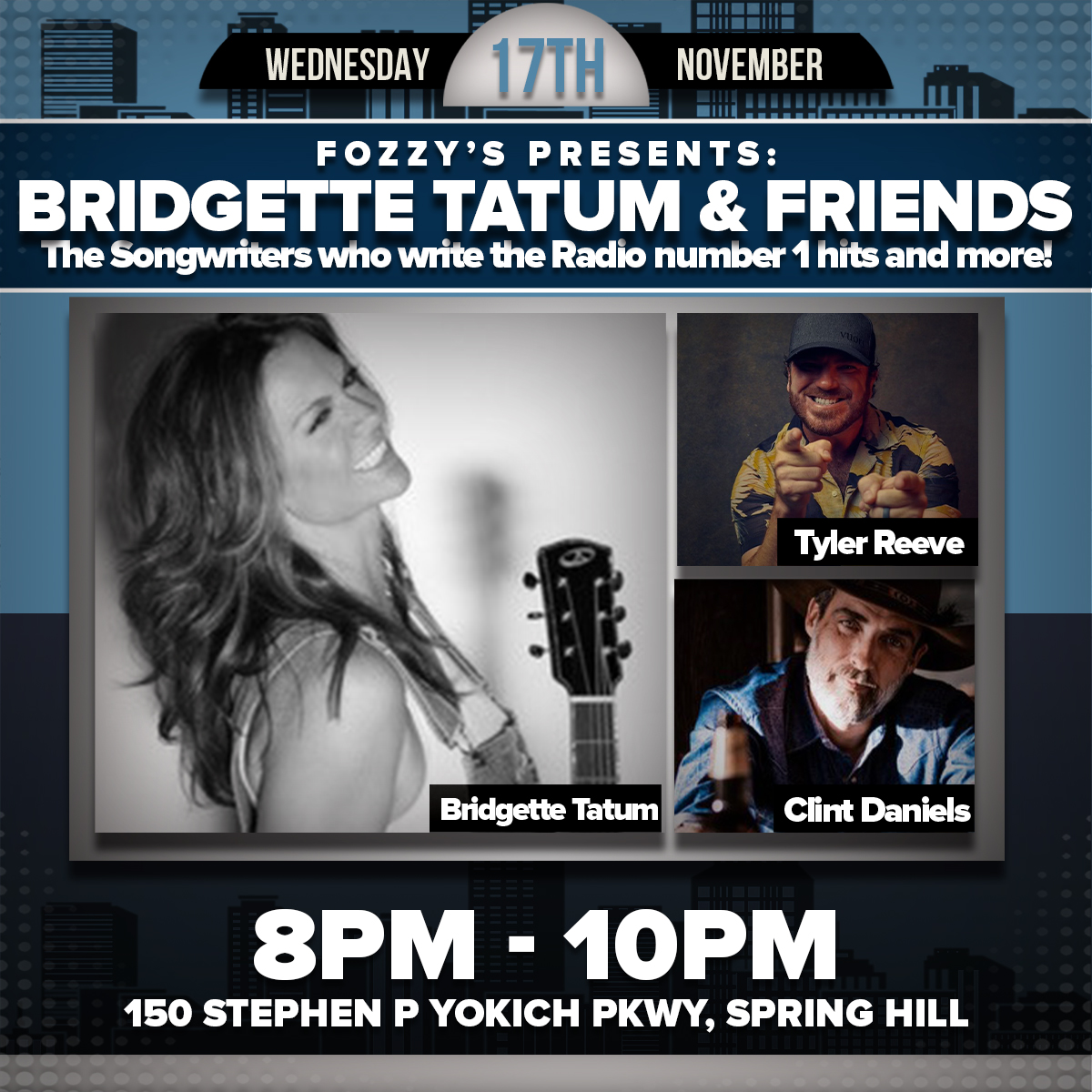 Bridgette Tatum & Friends The Songwriters who write the Radio number 1 hits and more!

To buy tickets ahead of time, click here – https://www.eventbrite.com/e/bridgette-tatum-friends-songwriters-who-write-radio-number-1-hits-tickets-203358660227

Born in Mobile, Alabama, and educated (socially at the very least) at The Florida State University, Tyler’s down home sensibility, attitude and humor come across in his songs and through his live performances.  Always a storyteller, songwriting fits quite naturally for Reeve.  “I’m a song guy; I love songs, I love stories, I love the ride music can take you on.”  Tyler’s performance are riddled with stories – usually funny stories – about inspiration for his songs, having a few too many, and even spending a night or two in jail.

Reeve has had his hand in writing some of country music’s biggest songs of the last few years, including the 2018 BMI Song of The Year, “In Case You Didn’t Know” (Brett Young), and multi-week #1 & XM The Highway’s 2020 Song of The Year, and ACM Musical Event of The Year nom, “Does To Me” (Luke Combs featuring Eric Church)   Other notables include “Whiskey On My Breath” (Love & Theft), “Where I Go When I Drink” (Chris Young), and “I Got Away With You” (Luke Combs).

Born in Panama City, Florida, Clint Daniels is an American country music singer and songwriter. He was signed as solo artist with Arista Nashville in 1998. There, Daniels released four songs, two of which charted on Billboard’s Hot Country Songs.

In 2003, Daniels signed to Epic Records but never released an album. Having already co-written his first Number One single for Joe Nichols (Brokenheartsville), he focused his career on songwriting and has been primarily known for his songwriting and performing at showcases across the country.

As a BMI award-winning songwriter, Daniels has co-written Number One singles for Joe Nichols, Montgomery Gentry (Roll With Me) and most recently, Eric Church (Some Of It). His songs have helped shape country music for almost 20 years and have been recorded by George Strait, Brooks & Dunn, Clay Walker, Easton Corbin, Jon Pardi and other country acts.

In 2019, Daniels signed a co-venture publishing deal with BMG and Porch Light Music.

To get your tickets visit – https://www.eventbrite.com/e/bridgette-tatum-friends-songwriters-who-write-radio-number-1-hits-tickets-203358660227